Prior to coming to ITEP, Andy worked over a decade with tribal communities as an organizer for the Sierra Club coordinating campaigns to protect sacred lands and curb climate change. He has served on the Paatuwaqatsi Run Committee, helping the Hopi community organize a powerful annual ultra-marathon on Hopi called the Paatuwaqatsi (Water is Life) Run. Andy holds a MA in Applied Cultural Anthropology from NAU and has traveled extensively in West Africa, Mexico, Europe and the US.

When not working, Andy enjoys trail running, biking and spending time with his family including his children Noah and Ruby and his wife and best friend Erin Widman, proud owner of Flagstaff’s best yoga studio, The Yoga Experience.
Speaking At
Electrifying Mobility on Tribal Lands 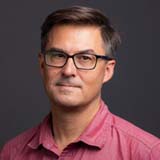